The Marion River Carry Railroad was created around 1900 by William West Durant to shuttle steamboat passengers between rapids in the Marion River.  A steamboat from Raquette Lake would sail to the mouth of the Marion River, where passengers would exit the boat, take a train ride less than a mile and then board another boat that continued through Utowanna, Eagle and eventually Blue Mountain Lakes.   Freight was also shuttled between points and made this an interesting little operation.  To gain the larger history of this rail-line, please visit S. Berliner, III's Marion River Carry webpage.  There you will find a history by Richard Sanders Allen titled "The Carry Railroad."

Here is a wonderful map re-created by S. Berliner, III and can be found on his great Marion River Carry Webpage.  This gentleman visited the area when he was a youngster in the 1940's and discovered the abandoned train in it's former engine shed. On his website you will find photos, history, a valuation map by Verplank Colvin  and many other  materials connected to the Marion River Carry.

Here is the area covered by the above map.
(MAP: USGS Historic Topos) 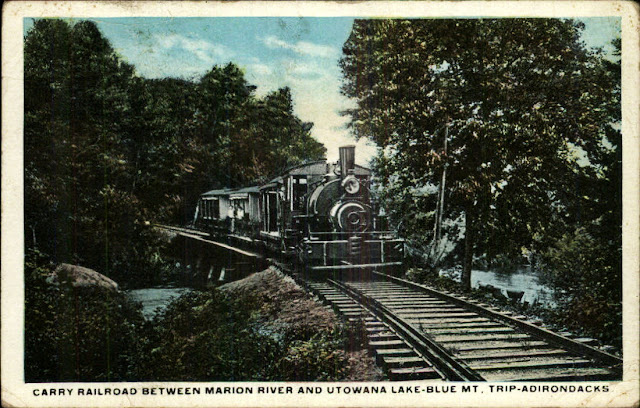 Here is Engine Number 2 built by The HK Porter Co. crossing the one trestle on the Line.  This was the final piece of motive-power used on the line and lasted until abandonment in 1929.
Visit and join the Raquette Lake Railroad Yahoo Group to learn about the railroad operations between Raquette and Blue Mountain Lakes.  There are powerpoint history lessons and you can discuss Adirondack Railroads with other interested parties.
(Postcard: Raquette Lake Railroad Yahoo Group) 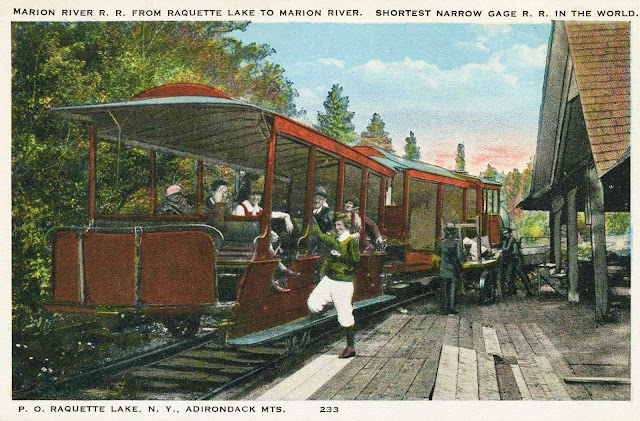 A postcard view of the re-purposed, Brooklyn Rapid Transit coaches on the railroad.  Although she was one of the shortest railroads in the US at 7/8 ths of a mile, she was standard-gauge to accommodate the freight cars being moved from Raquette to Blue Mountain Lakes. 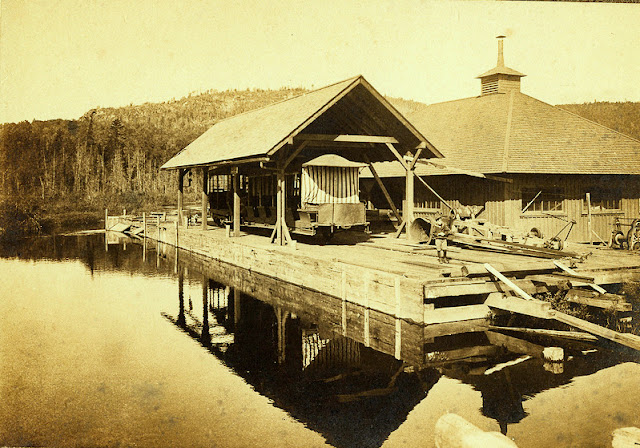 The dock  for The Lower Carry's loading and unloading. Photo is from 1911.
(Postcard: Raquette Lake Railroad Yahoo Group) 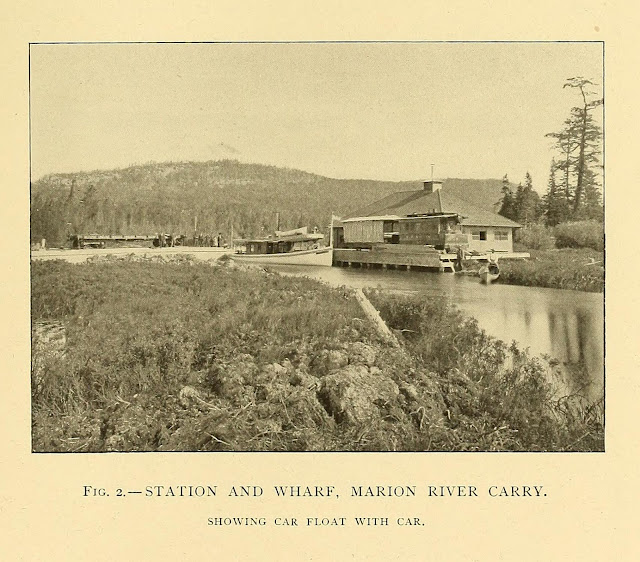 More Images from the Lower Carry.  Notice the flat car on the left and the cars on the dock.  One of them is an open-car that we see in most photos, but the other appears to be a closed car NOT like we are used to seeing.

These two photos are from page 232 of "Annual report of the Forest, Fish and Game Commission of the State of New York" (Courtesy of The  Smithsonian Library) 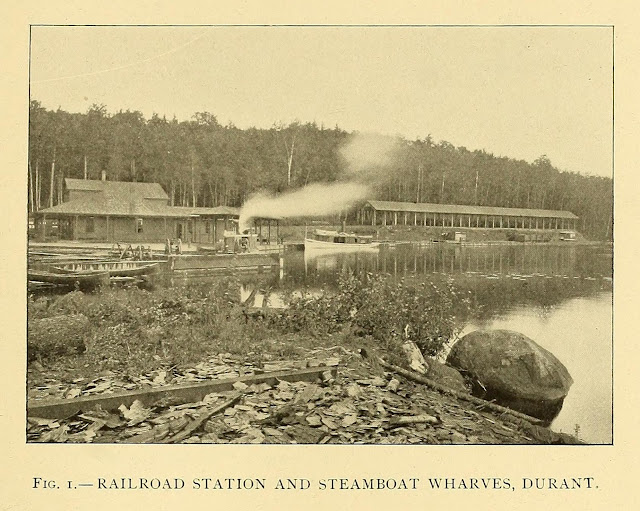 From page 232 of "Annual report of the Forest, Fish and Game Commission of the State of New York" (1900) Smithsonian Library. 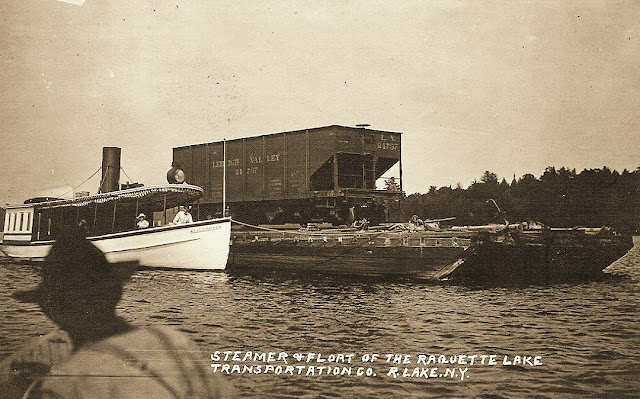 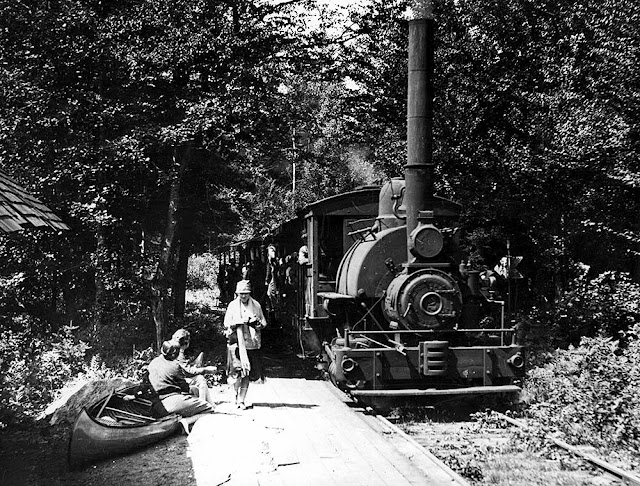 Great shot of Porter Number 2 sporting a smokestack extender.  This was used to provide more power for the locomotive.  (Photo:  Richard Palmer Collection) 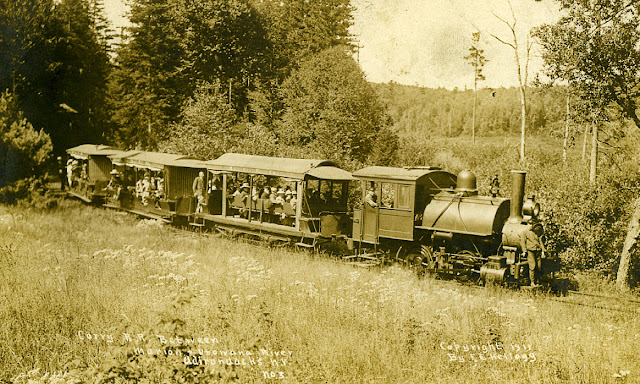 A great postcard showing a full Three-car-train on the railroad.  Parts of all three of these cars were used to construct the car on display at the Adirondack Museum in Blue Mountain Lake.
(Postcard: Raquette Lake Railroad Yahoo Group) 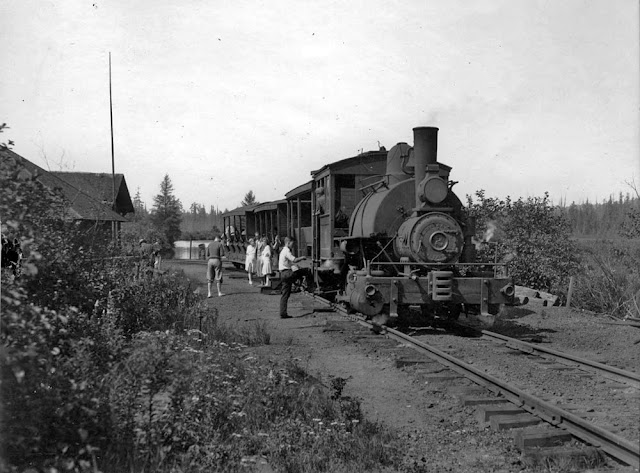 An excellent photo of our train in action.  At first a canal was discussed for moving boats between the points on the Carry.  A short-railroad was the most economical.
(Postcard: Raquette Lake Railroad Yahoo Group) 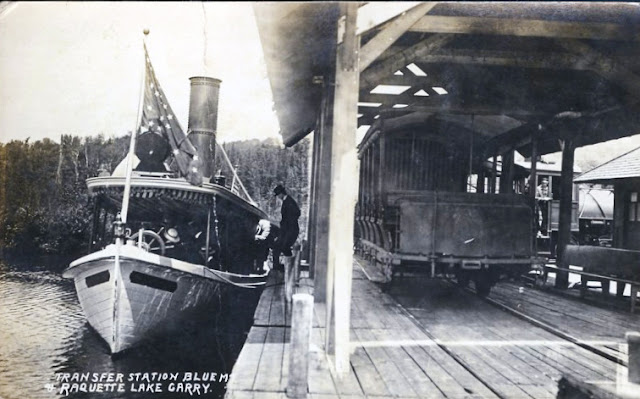 One of the steamers at the transfer dock at The Lower Carry.  You can see the engineer waiting in the saddle-tank engine for patrons to exit the steam-boat and climb about his train.
(Postcard: Raquette Lake Railroad Yahoo Group) 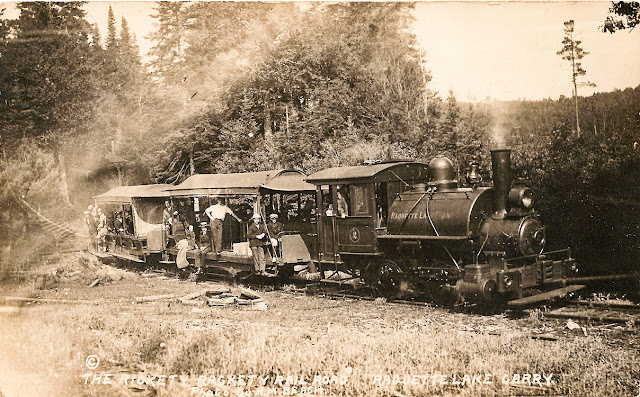 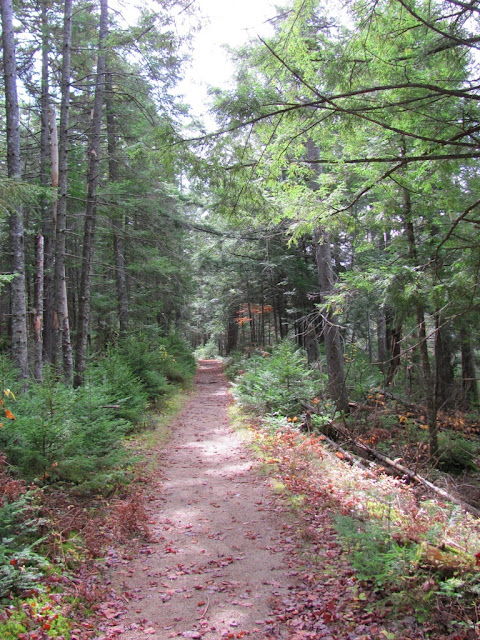 A canoe trail occupies the former right-of-way.  Much like the issue facing travelers 100 years ago, modern-day canoeists and kayakers carry their mode of transportation between the un-navigable section of the Marion River.(Photo: Doug Ellison) 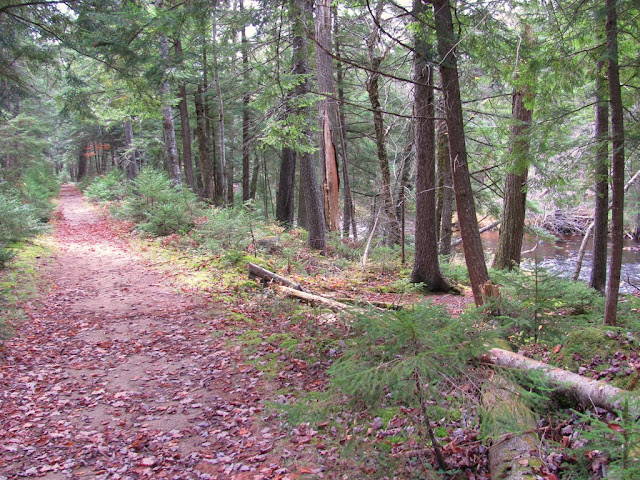 Another view of the former-line today with The Marion River paralleling.
(PHOTO: Doug Ellison) 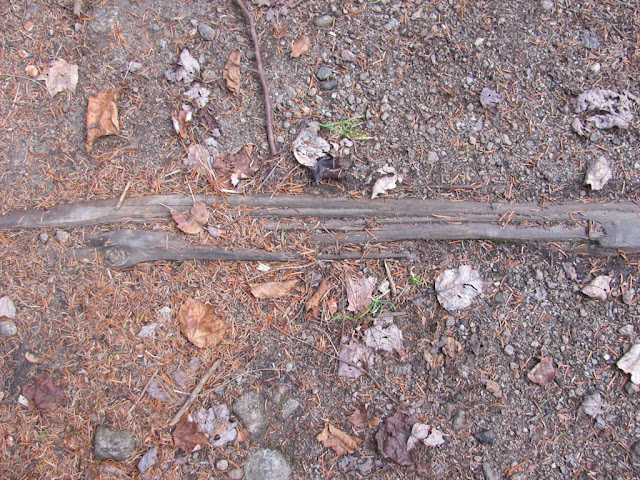 A tie from the Carry-railroad sits in the former road-bed.  (PHOTO: Doug Ellison) 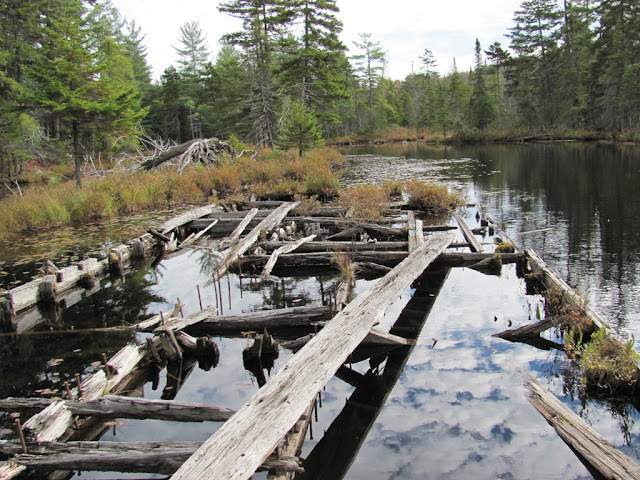 Remains of either a barge from the operation, or of the dock at the Utowanna Lake connection.
(PHOTO: Doug Ellison) 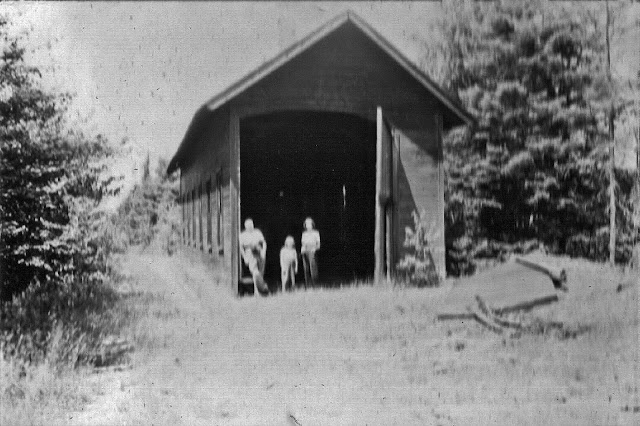 Here is a photo of S. Berliner. III's family posing at the abandoned engine shed.  This building could hold the Porter locomotive and her three passenger cars.  Calling it an 'engine' shed was short-sighted!  This building was located on the Raquette Lake end of the line. (PHOTO: S. Berliner, III) 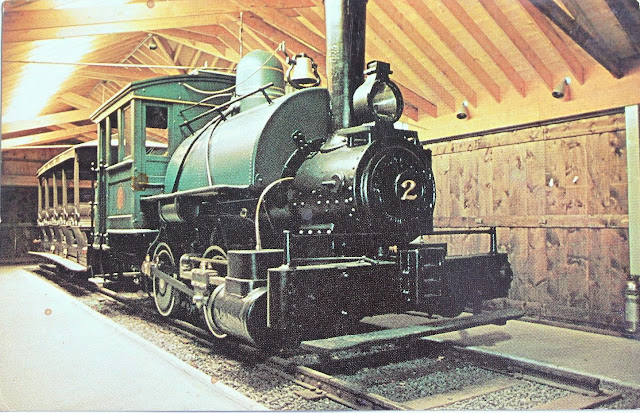 A postcard showing restored Number 2 at the Blue Mountain Lake Museum.  The engine and her passenger cars sat in it's former Engine (train) house on the Marion River for several decades before moving to the Adirondack Museum at Blue Mountain Lake.

To the Public Service Commission Second District Gentlemen In accordance with your instructions of July 12, 1909 I have made an inspection of the Marion River Carry railway which makes the connection between Raquette and Blue Mountain lakes.

This inspection was made in accordance with request made by the Forest Fish and Game Commission July 9, 1909 The following is a description of the railroad and other essential details.

The inspection was made August 6, 1909 The owner and operating company is the Raquette Lake Transportation Company with offices at Raquette Lake, NY. The gauge is 4 ft 8 1/2 in and road is seven eighths mile long Connection is made between two points on the Marion river through which navigation is impossible By this method transportation is possible between Raquette lake and Blue Mountain lake A private right of way 200 ft in width is used and is laid with steel rails weighing 60 lbs per yard Ties are spaced about 24 in and roadbed is well ballasted with gravel The Blue Mountain terminal is 25 ft higher than the Raquette Lake terminal The railroad is nearly a continuous curve with three or four short tangents No highway grade or private crossings exist There is 1 timber trestle about 10 ft in length located about one fourth mile from the Raquette Lake terminal Rails ties roadbed and bridge are in good condition for the light equipment and speed of trains 5 minutes being used in running the seven eighths mile.

The equipment consists of 1 Porter tank locomotive and 3 light open street cars for passenger traffic The locomotive is of the tank type and anthracite coal is used was built in 1001 by HK Porter & Co weighs 15 tons all on drivers no trucks or tender boiler steam pressure 140 lbs per sq in cylinders 1 1 in diameter by 16 in stroke air and steam brakes on all wheels link and pin coupler is used the condition is good throughout except spark arrester which is in exceptionally bad condition.

Light open cars formerly used as street horse cars are used for passenger traffic and are numbered 1 2 and 3 Nos. 1 and 2 have 10 horizontal reversible seats with a seating capacity of about 40 persons No 3 is equipped with camp stools a number of which are in poor condition and generally unsafe two pairs of wheels to each car Nos. 1 and 2 have journal box pedestals attached to side sills of car No 3 has a metal truck frame cars are equipped with hand brakes and metal brake beams of the usual type used in street car service link and pin couplers are used bell signals on each car cars are protected with side rails which are placed in position by train crew before train is in motion all trips are made in daylight and no lighting equipment is furnished Cars are freshly painted and clean and while the equipment is old it is safe for the operating conditions with the exception of camp stools in car No 3 and these in my opinion should be removed and the type of seat used in cars Nos 1 and 2 substituted.

The season usually opens May 5th and is closed November 10th. Passenger traffic  consists largely of excursionists from Raquette lake to Blue Mountain lake. Freight traffic consists largely of parcel freight A freight float is in operation on Raquette lake and Blue Mountain lake and by this method loaded cars are received from the Raquette Lake railroad and transported by means of freight floats and the Marion River Carry railway to all lake points lumber coal and other bulk freight is handled in this manner. Each year between 50 and 60 cars of freight are handled. This railroad passes in close proximity to heavy forest lands There are no repair facilities close at hand and gross carelessness and ignorance were manifested in the maintenance of spark arrester of locomotive. There was no indication of any fires having occurred along the right of way I believe that this railroad should be included in the order for use of oil for steam generation in its locomotive.

Link and pin couplers are used throughout. On the passenger cars there does not seem to be any particular danger to employees as cars remain coupled and cars are so light they can be pushed against locomotive by one man to make coupling. On the locomotive the condition is different locomotive being backed on to lake floats to handle heavily loaded freight cars the liability of injury to employees is considerable and I believe the locomotive should be equipped with automatic couplers. Recommendations That camp stools in passenger car No 3 be removed and replaced with stationary seats that locomotive be equipped with automatic couplers that spark arresters in locomotive be put in good condition at once and so maintained.