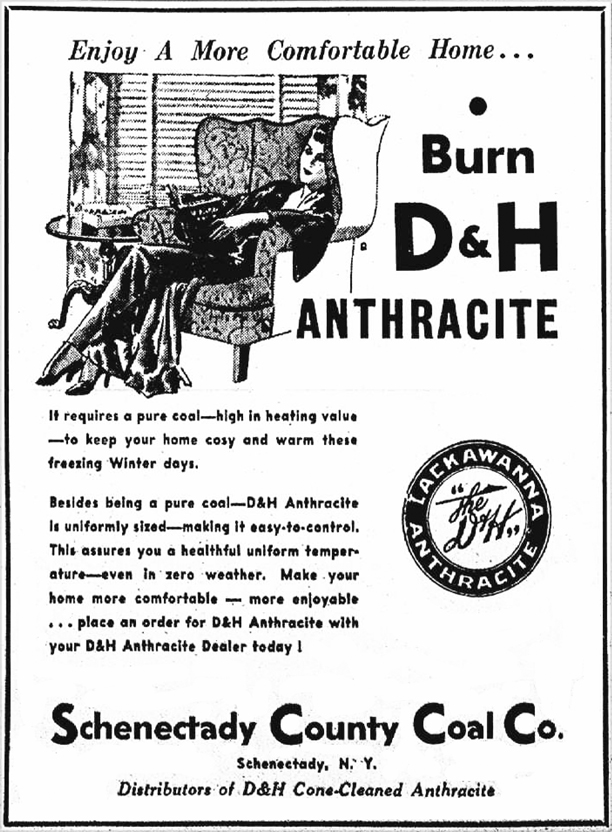 Here's an ad from my hometown paper, The Schenectady Gazette, dateline 1940.  Low smoke, long burning Anthracite.  I still remember my neighbors on Goose Hill in Schenectady getting a coal delivery.  The delivery man would put a chute in the cellar window and let her rip!  I used to ask my mother why we couldn't get a coal delivery!  At least we still got a milk delivery...


Gino
Posted by Gino’s Railpage at 9:07 PM No comments:

Email ThisBlogThis!Share to TwitterShare to FacebookShare to Pinterest
Labels: Anthracite, D and H, Delaware And Hudson

From The Associated Press (Saratoga and North Creek Railroad)

A railroad company is renovating rusty, overgrown tracks to get at millions of tons of waste rock at an abandoned iron and titanium mine near the source of New York's Hudson River and the highest peaks of the Adirondacks, part of a widespread resurgence of short line and regional freight lines.
The planned reopening of a 30-mile rail link is being driven by high oil prices that make rail shipping more economical than trucking. Backers hope the Adirondack line will bring an economic boost to faded towns along its route by providing a new shipping option for products such as minerals, logs and paper products.


In the past 30 years, the number of short line railroads has grown from about 70 to about 550, said David Whorton, a spokesman for the American Short Line and Regional Railroad Association. Short lines are typically mom-and-pop businesses serving two to six customers, usually connecting with another short line, regional or major freight railroad such as CSX Transportation or the Norfolk Southern Railway.
Increased fuel costs and congested highways have made rail shipping more attractive. "A railroad can move a carload carrying three to four trucks worth of goods 300 miles on a gallon of diesel," Whorton said.
The federal Surface Transportation Board on June 14 cleared the way for the New York freight line to be operated by the Saratoga and North Creek Railway. The railway is owned by Chicago's Iowa Pacific Holdings, which also operates two Texas short line railroads that it said are booming as a result of oil and gas drilling.
The railway already operates a sightseeing train from Saratoga to North Creek, an Adirondack hamlet along the Hudson River that's popular with skiers and whitewater rafters. The railway connects with the national rail network at Saratoga Springs, providing the new freight line access to markets across the country.
The rail company will reopen the abandoned tracks from North Creek to Tahawus, 100 miles north of Albany. The first phase of the project, to be completed this summer, will reopen 6 miles of tracks between North Creek and North River, where the rail company is negotiating with Barton Mines to ship garnet. The company expects to reopen the tracks to Tahawus within a year.
Several environmental groups, including a local Sierra Club chapter, sued unsuccessfully to derail the project because 13 miles of the tracks go through state Forest Preserve land, where motors of any kind are prohibited under the state constitution's "forever wild" clause.
"We're not concerned about the environmental impact of one train a day hauling crushed rock," said Charles Morrison, who on June 25 appealed the Surface Transportation Board director's decision. "What we're concerned about is that the Forest Preserve, which is a national historic landmark, will be violated again as it was in 1942 when the government took the easement to build the railroad."
The railway submitted an argument against the appeal; it's unclear when the board will make a decision. In the meantime, the railway is proceeding with track clearing.
The rail line was built during World War II because the U.S. Army wanted the titanium from an old iron mine in Tahawus. The government spent $3 million to build the line and leased it to National Lead Co., owner of the mine. The line has been unused since 1989.
Ed Ellis, president of Iowa Pacific Holdings, said his company will spend "six or seven figures" to restore the tracks to Tahawus. The tracks have been paved over at numerous road crossings, and saplings have grown up between the ties, some of which have rotted and need to be replaced.
The company will market about 100 million tons of crushed limestone left over from mining operations at Tahawus for use in highway and rail bed construction, Ellis said.
"Rail transport is enjoying a major resurgence at this point," Ellis said. "Rail lines are being reopened in Wisconsin, Texas, Colorado and California. We're handling more traffic now as an industry than in World War II."
_________________________________________________________________
Here are some photos of the recent brush-cutting between North Creek and North River...

Comments from Brad Peterson: They have indeed cut brush from MP NC 0 to just above MP NC 5.  That is where Barton Mines is located.  They have also cleared the Ordway siding.  This is where the cars are now stored.  The switch is the north end of Ordways siding (before and after the initial cutting).  They went up with an extra job on Thursday and put those cars in the south end of the siding.

A Big Thanks To Brad!

Gino
Posted by Gino’s Railpage at 5:09 PM No comments: