The following is a Blog entry about the Amusement Parks and picinic areas along the Berkshire Electric Railway...


From Stories Of The Berkshire Hills Blog...

Posted by Gino’s Railpage at 8:29 PM No comments:

Got your attention...right?  Model railroader and FJ&G Super-fan, Steve Lamora is once again building the FJ&G in HO scale.  Steve had an FJ&G layout in the past, but scrapped it try some other roads.  Seeing the Atlas S2s and constant harassment by his friends has Steve RE-modeling our favorite railroad again... 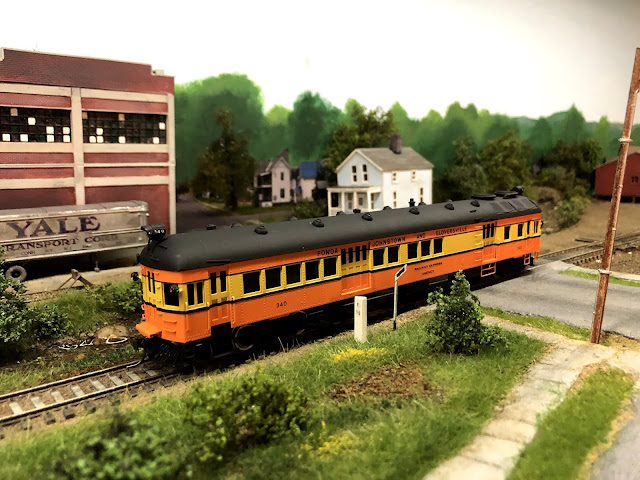 A custom painted Brill Car grabs one's attention immediately!  The detail is incredible.  The 340 was purchased in 1938 to carry mail between Fonda and Gloversville.  A job that was previously held by electric cars on the former Cayadutta Electric Railroad. 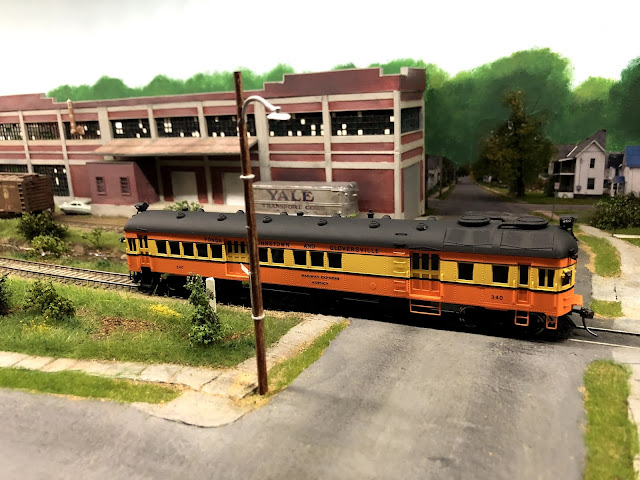 Here she is crossing North Street in Gloversville. 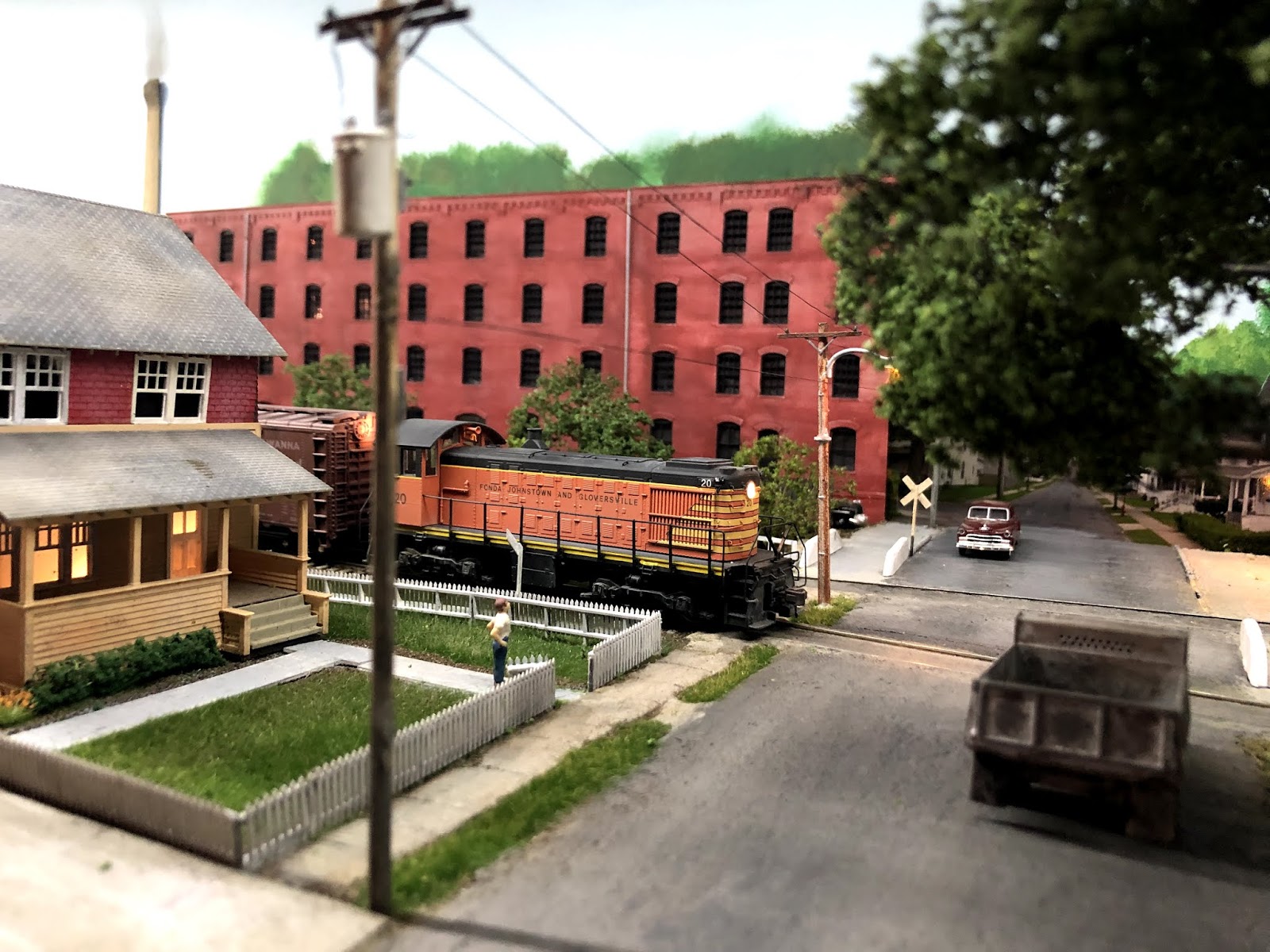 A beautiful detailed S2 is seen at the Lincoln Street Crossing.  This model has all the sounds of 1950's railroading. 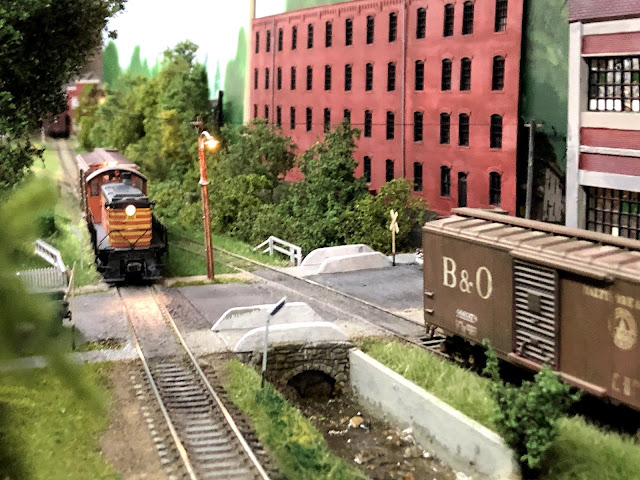 This crossing view also includes a glimpse of the Cayadutta Creek. 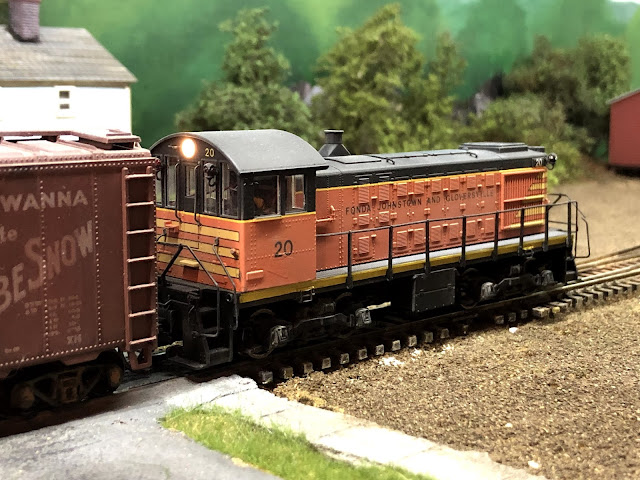 You can almost imagine Leslie 'Pete' Vosburg, or Red Morey running the Number 20 north through Gloversville. 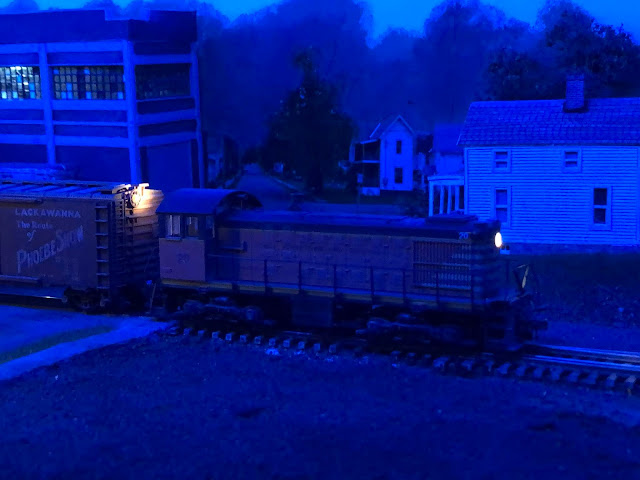 Night-time is deep purple on the FJ&G! 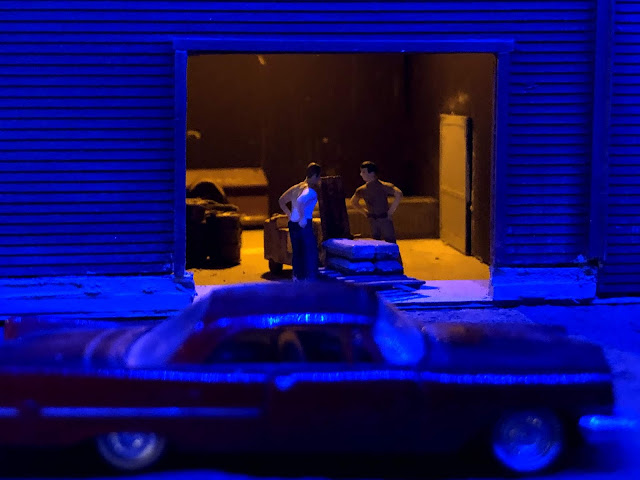 The skin mills in Gloversville and Johnstown ran night and day.  This scene captures the 1950's perfectly... 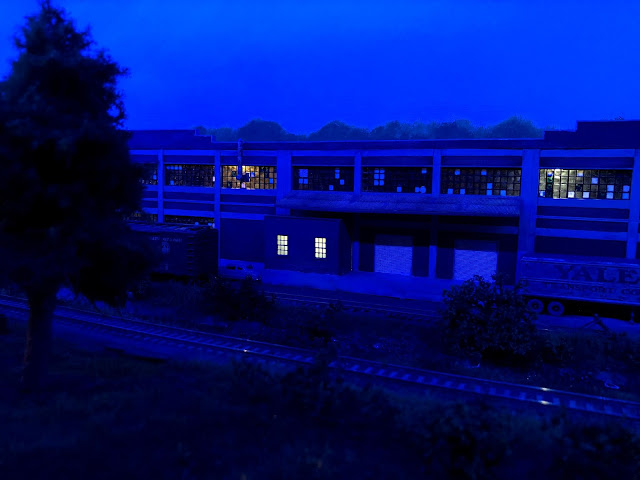 Decca Records was a hopping place in 1950's Gloversville.  Before that it was Surpass Leather.  The building still stands between Lincoln and North Streets...

Don't take my word for it, but have a look and listen at Steve's FJ&G! 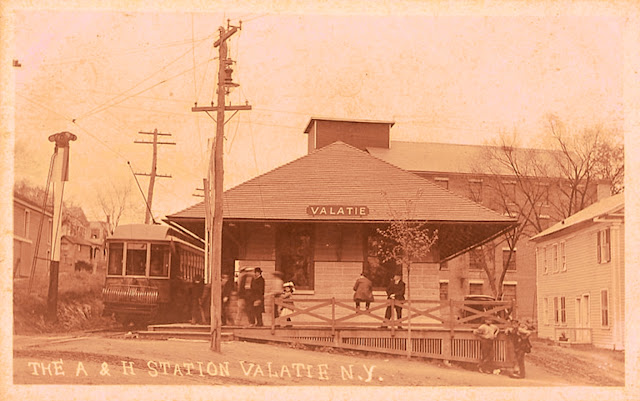 The Albany/Hudson Trolley Depot on Main Street in Valatie.  Semaphore Signal at the station. 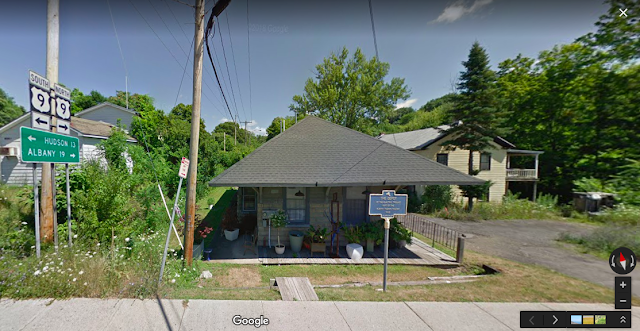 Same view today from Main Street in Valatie.  Plans are underway to convert the former trolley line into a biking/hiking trail running from Hudson, New York to Albany, New York. 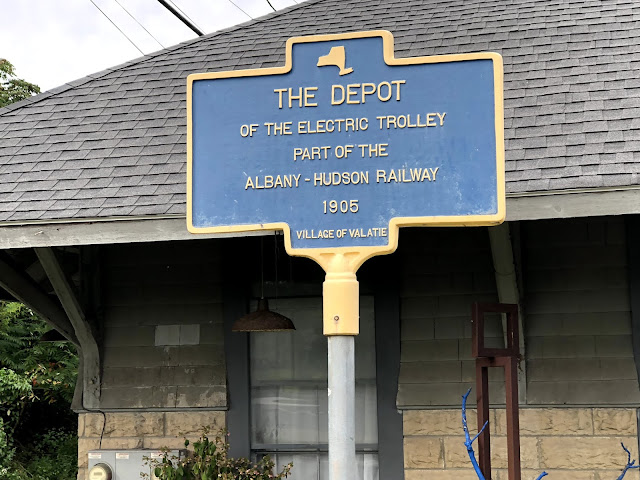 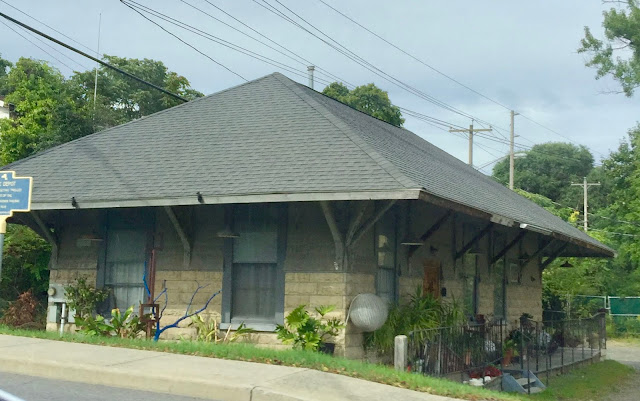 A summer of 2018 photo of the former depot.  Notice the power lines behind the Depot.  The right-of-way of most Capital District trolley lines were purchased by Niagara Mohawk, or their predecessors to run high-tension lines.
(Photo: Jared DiCarlo)
Posted by Gino’s Railpage at 9:06 PM No comments: 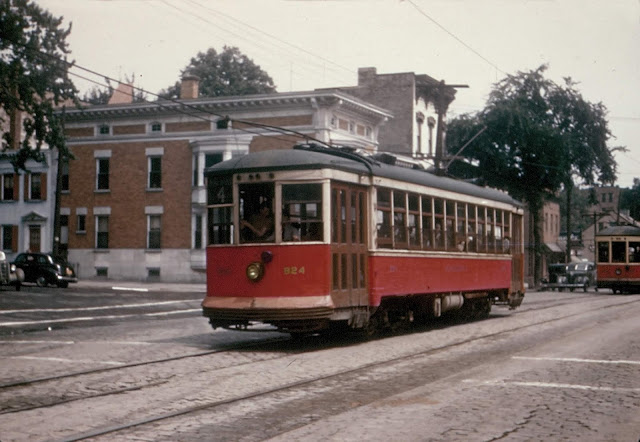 UTC 824 is seen heading west on Madison Avenue in Albany. Today this would be NYS Route 20.
Willitt Street is to the left. 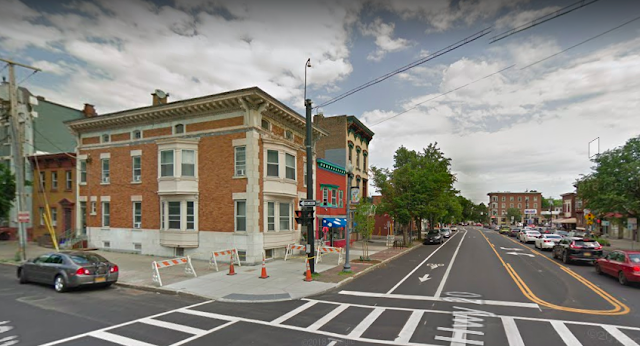 
Posted by Gino’s Railpage at 8:28 PM No comments:

The Last Run Of The FJ&G


The Last Run Of The Fonda Johnstown & Gloversville Railroad

November 27th will be the 34th anniversary of the last run of the FJ&G Railroad.  The road had been embargoed the previous May, but various  equipment moves and maintenance took place through the Summer months.

On the morning of Tuesday, November 27th, Trainmen Mark Wilber and Mike Yerina alternated running ALCO RS3 103 and protecting the crossings in town.  There were too many cars to move that day so it would finally be completed 4 years later in 1988.  This was the last day a locomotive graced the rails between Broadalbin Junction, Gloversville, Johnstown and finally Fonda.

Posted by Gino’s Railpage at 7:57 PM No comments:

Friday the 9th of September was a sad parade of sorts.  Almost all of the Saratoga And North Creek's motive power was moved south from North Creek.  Leading the historical consist was BL2s 52 and 56.  EMDs were in full force as were ALCO S2 switchers...

Special thanks to Bonnie Shatraw Wingler on Facebook's Railroading Rambler for sharing these photos with us....

The Last Ride Of The Saratoga And North Creek Railroad

On Saturday, April 7th The Saratoga And North Creek Railroad polished up their BL-2 #52 and made what looks like their last passenger run.  At this time what the future of the S&NC holds is anyone's guess.  Our friend Greg Klingler hit the road and snapped some photos of the last run of the SNC... 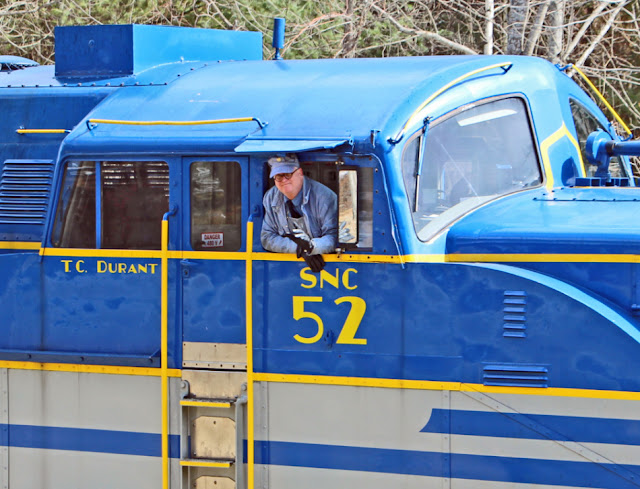 Manager Of Passenger Services, Steve Torrico sits at the throttle of the Number 52. 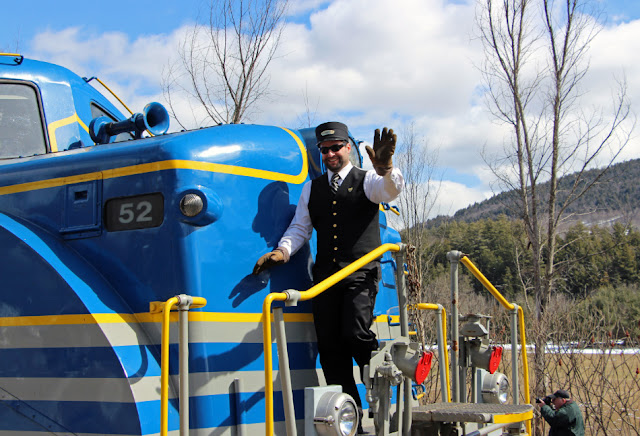 General Manager Justin Gonyo, who's family has worked the Adirondack Branch for a century gives a wave as they prepare to head back to Saratoga Springs. 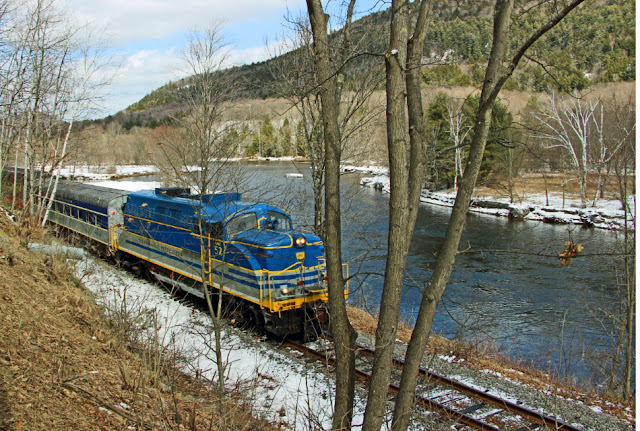 Leaving Thurman with the beautiful Upper Hudson and the gorgeous Adirondack Mountains for a background... 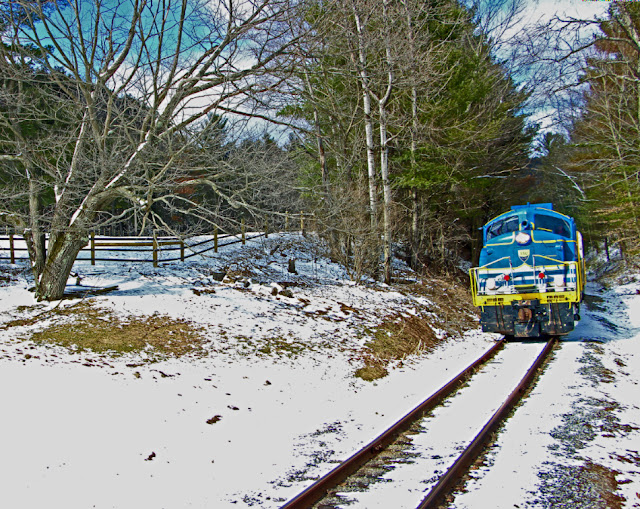 The BL-2 pulling passengers, perhaps for the last time passes through Stoney Creek. 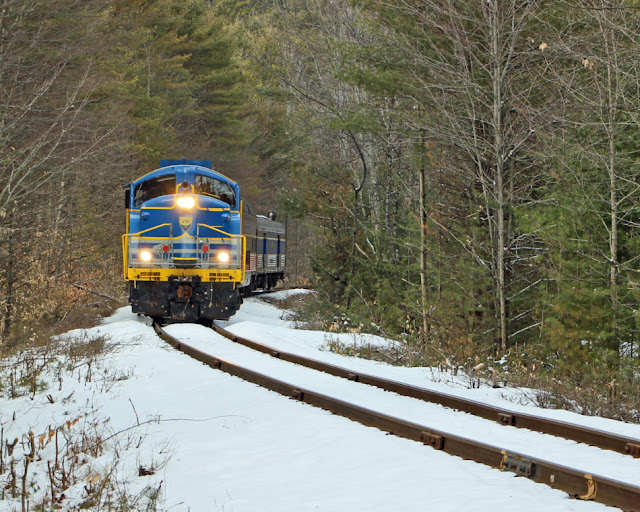 Making the curve at Hadley.  Is this the last time tourists cross the Sacandaga at Hadley?

Posted by Gino’s Railpage at 8:21 PM No comments:

Last Of The Snow Trains

Due to flooding on the Upper Hudson River, The Saratoga And North Creek Railroad was only able to run a shortened Snow-Train Schedule.  Trains were due to run January through April.  The last train will be Saturday, April 7th...

All Photos By Greg Klingler 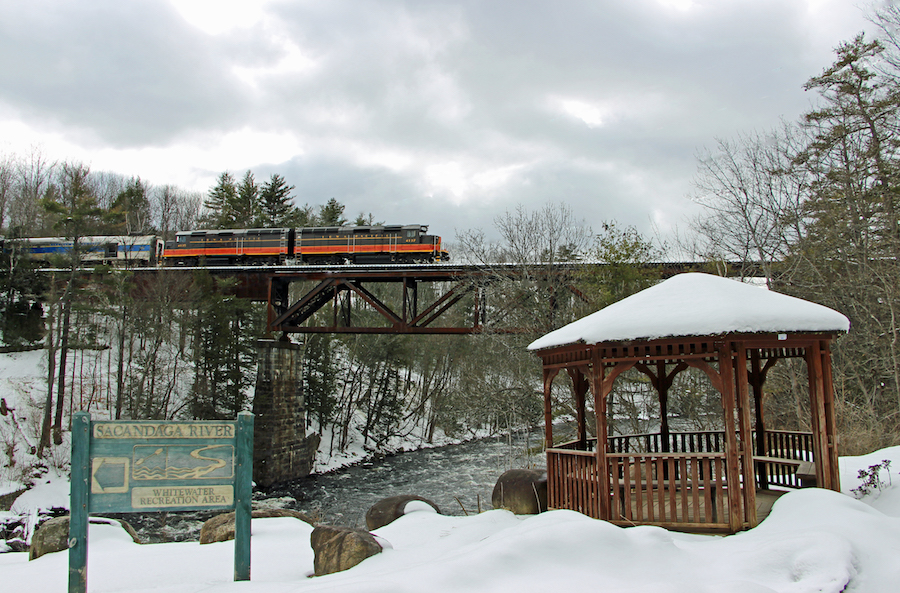 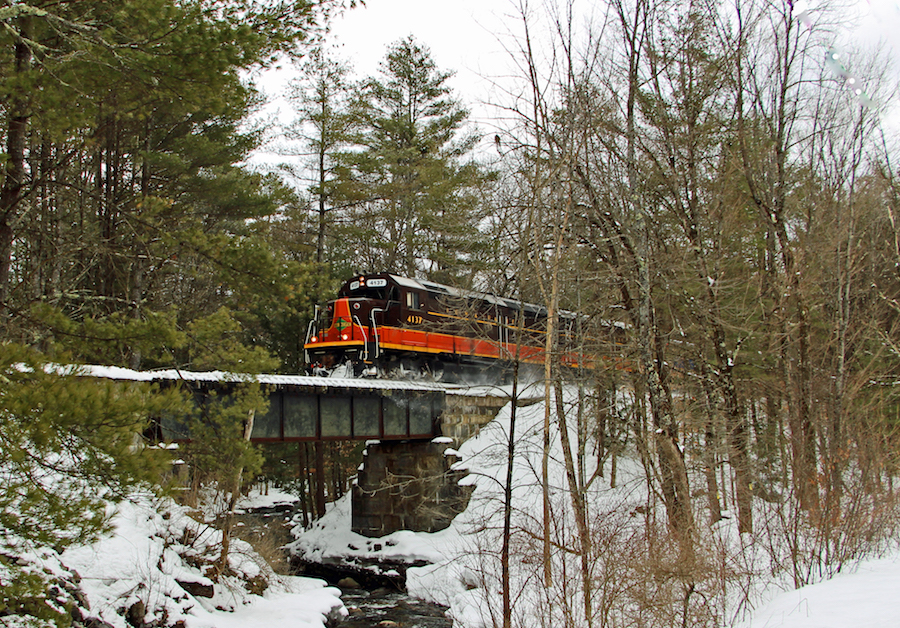 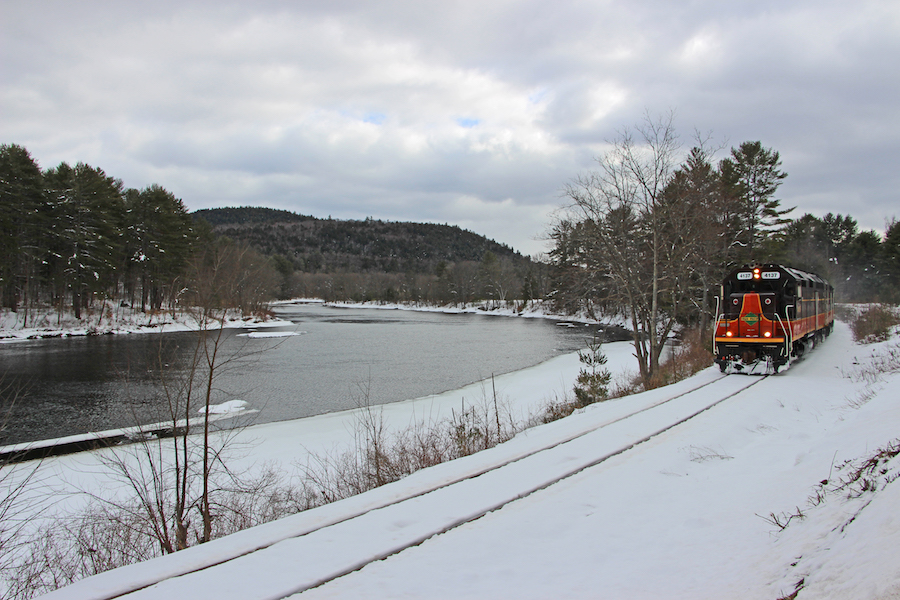 Northbound at the Stoney Creek Curve. 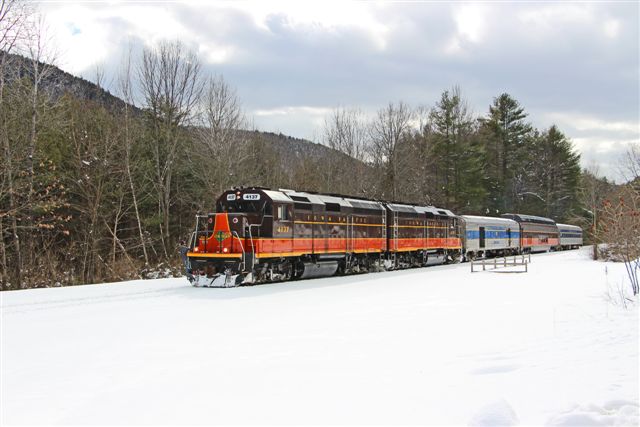 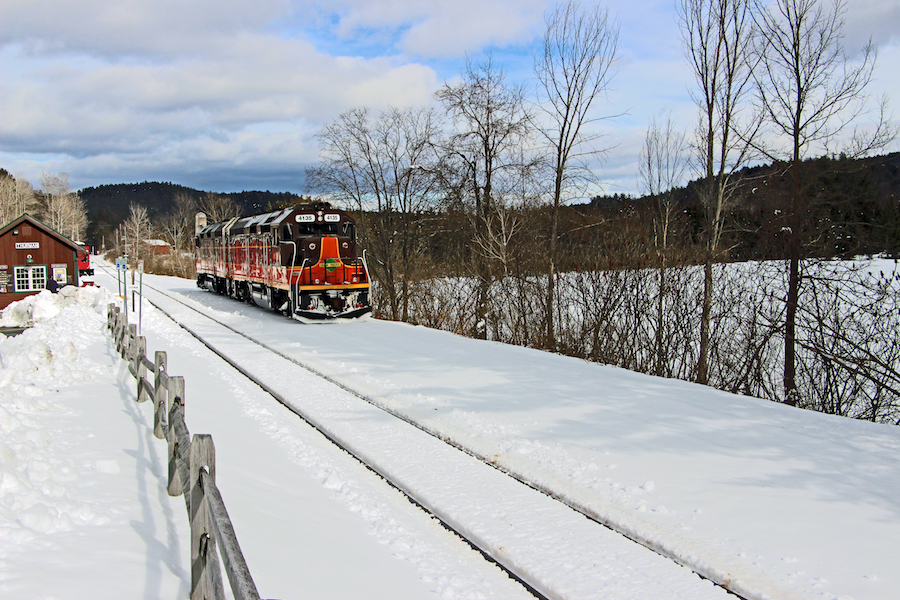 Running around at Thurman Station with the 4135 now in the lead. 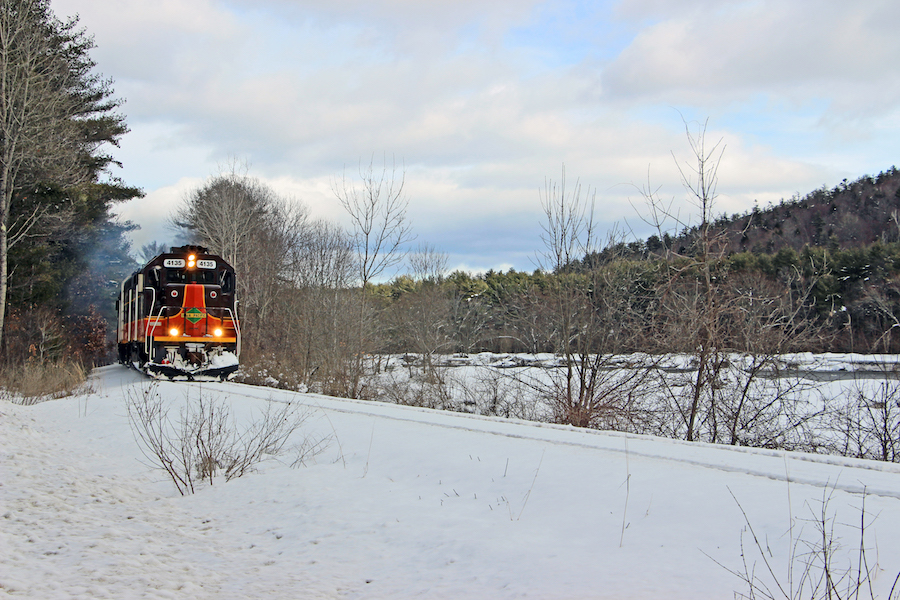 Now South-bound, leaving Thurman for Saratoga Springs.  Ice-chunks can be seen on the River in the background. 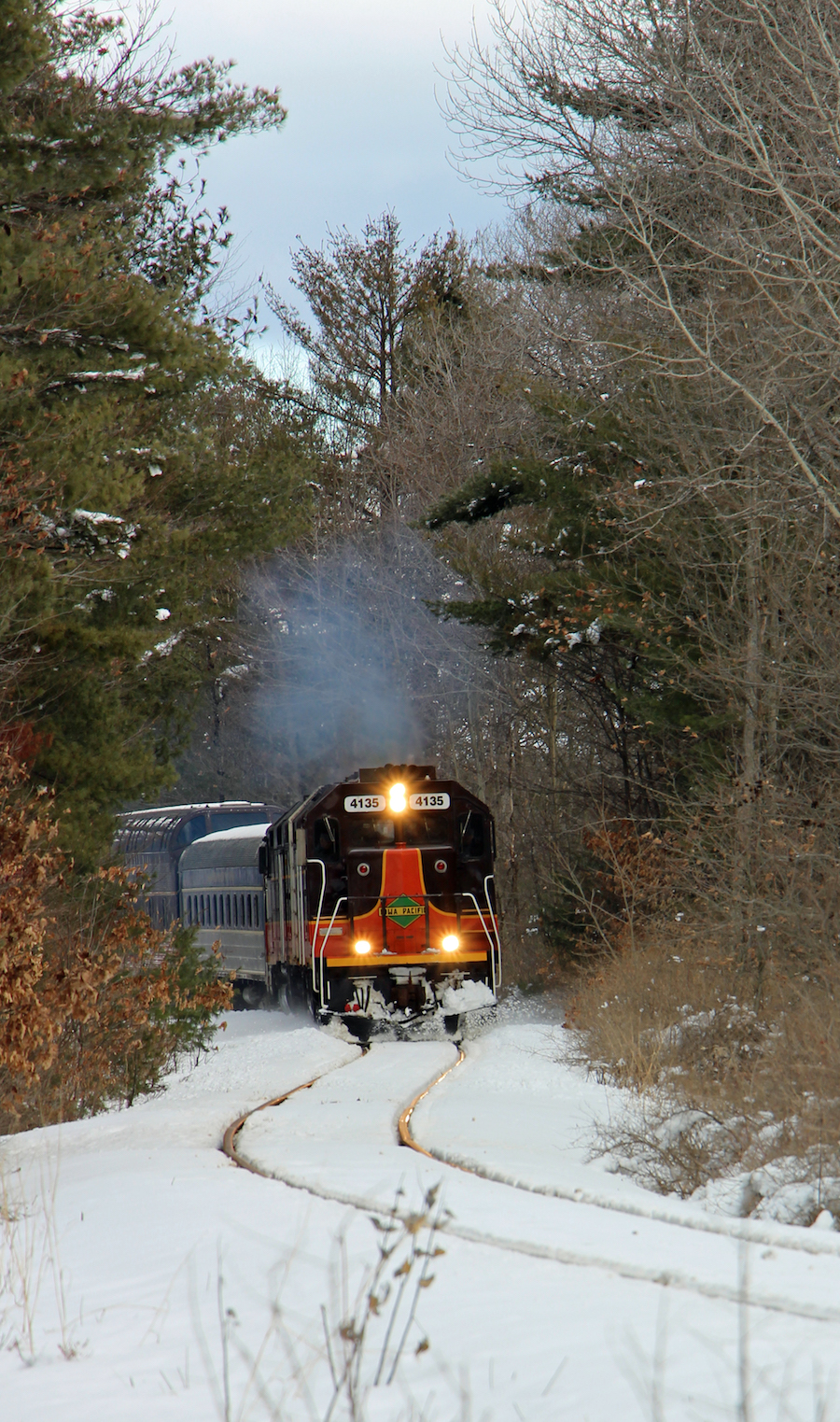 Here a great shot of the South-bound leaving Thurman. 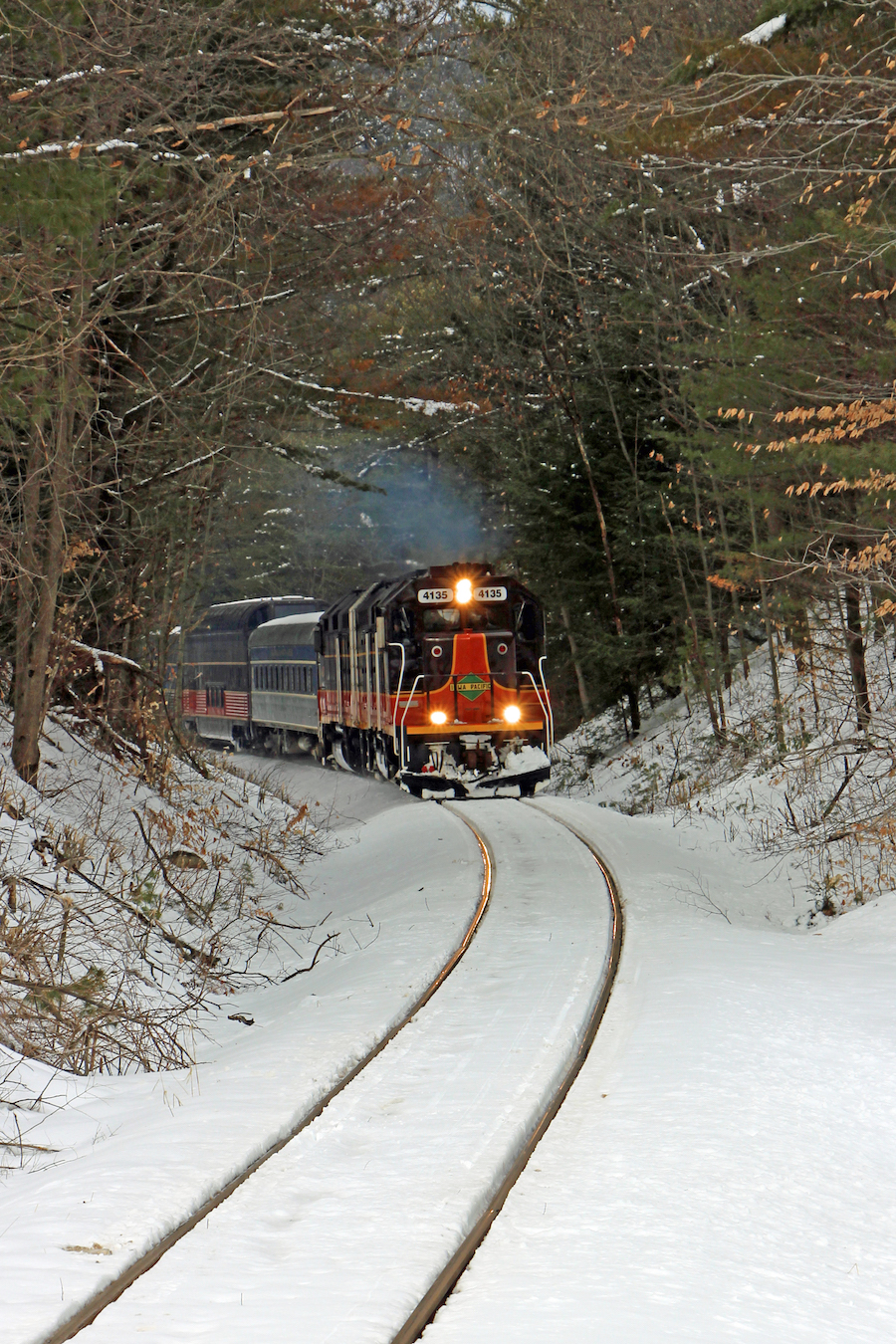 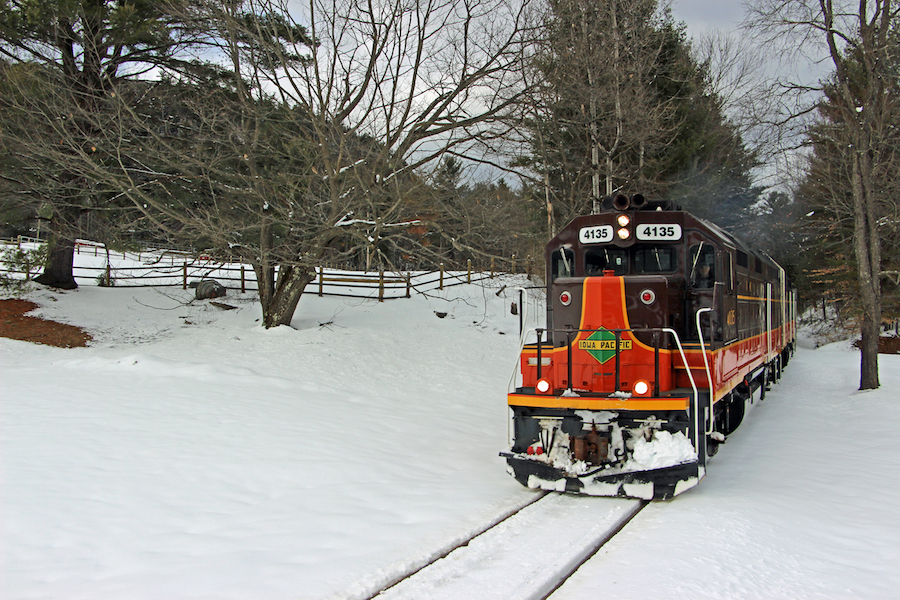 The 4135 entering The Stoney Creek Ranch. 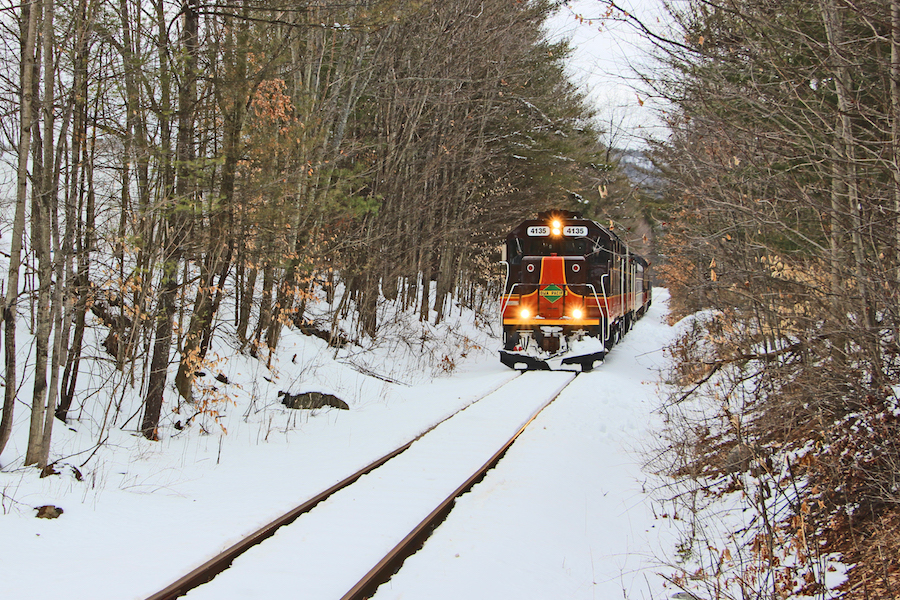 A big thanks to Greg Klingler for sharing his snow-train photos!  Hopefully there is more to come...

Posted by Gino’s Railpage at 7:22 PM No comments: