The D&H Lake George Branch and Glen Lake Too!

Steam Railroads and Electric Streetcars On their way to the Queen of Adirondack Lakes...

Originally part of the Glens Falls Railroad, the Caldwell Branch was completed from Glens Falls to Lake George on May 29th, 1882.  Here's a trip to the lake and a stop to see a local family with a history of work on The Hudson Valley Railway...

The first Lake George Depot and D&H passenger train arriving in the early 1900's.  This station was demolished in 1911.  The site of the former Gaslight Village would later occupy the land to the right.

This is the second Lake George Depot.  This replaced the original in 1911.

Here is the rebuilt Fort William Henry Hotel.  A popular destination also built in 1911 by The Hudson Valley Electric Railway which was controlled by the Delaware and Hudson.  Before this, a larger Fort William Henry Hotel stood here, built in 1855 and burned in 1909.  The newest incarnation of the Hotel is actually the third, but parts of this building remain after it was demolished in 1969.

Another Camelback and the Water Tower at Lake George.

You would have passed Glen Lake on your way to Lake George.  This train almost made it there after the line was open in 1882, but may have taken the curve too quick.  This curve on Glen Lake was the scene of several accidents.  One which left boxcars at the bottom of the lake for years.  Their remains have since been removed.  Notice the baggage and parcels on the overturned coach.

Here's a passenger train on the way to Lake George in 1948 from the the location as above.  This time they are successfully negotiating the curve.  This photo was taken from a bridge that used to bring visitors down to the Lake.  The Hudson Valley Trolley line passed this spot right above this hill.  The photographer of this photo's name was Charles E. Aubrey.  Charles' father and uncle were motormen on the Hudson Valley Railway and grew up in nearby Queensbury, near the Queensbury Car Barn.

Charles follows the train as it passes below him on it's way to it's final destination.  Charles' son, Phil Aubrey, made the trip on the final passenger train to Lake George in November on 1957

Here is the camp of Charles Aubrey on scenic Glen Lake.

Closer inspection shows us two Hudson Valley Railway Marker Lamps used to light the outside of the camp.

Here's a closer view of the marker lamps on the camp.  Don't rush up there since the lamps are long gone.

Here's a company photo of a young Archibald Aubrey.  Archibald is Charles' father and Phil's grandfather.  Archie worked on a trolley for 20 years until the electric line closed in 1928.  Read this neat article about Archie's retirement and subsequent, re-hire...

ARCHIE AUBREY BACK ON THE JOB
The old saying, "Once a railroad man, always a railroad man." is borne out in the case of Archie Aubrey.
When the trolley service ended December 1, Mr. Aubrey took a position in the Imperial Wall Paper company's
plant, but after spending twenty years as a trolley conductor he found a job in a mill not to his liking, so he is back in the service as a bus operator for the Hudson Transportation company.

Here is an older Archibald with his trolley and a Superintendent of the line in Fort Edward.

Here is the badge from Archibald's Conductor Hat

Here is a Union -Ribbon that Archibald wore on his uniforms for Parades and other special occasions.

As mentioned earlier, Archibald's brother Edgar was also an employee of The Hudson Valley Railway.  It was Edgar who got his brother a job on the HV.  Edgar died in a horrific crash at Fort Miller in September of 1908. His new wife would bring a lawsuit against the Railway and receive a reward a few years later...

Here is a ribbon that Archibald wore proudly considering the sad circumstances of his brother Edgar's unfortunate accident.  This ribbon was issued by the the Electric Railway Union called The Amalgamated Association of Street and Electric Railway Employees of America and it honored it's members that had passed on... 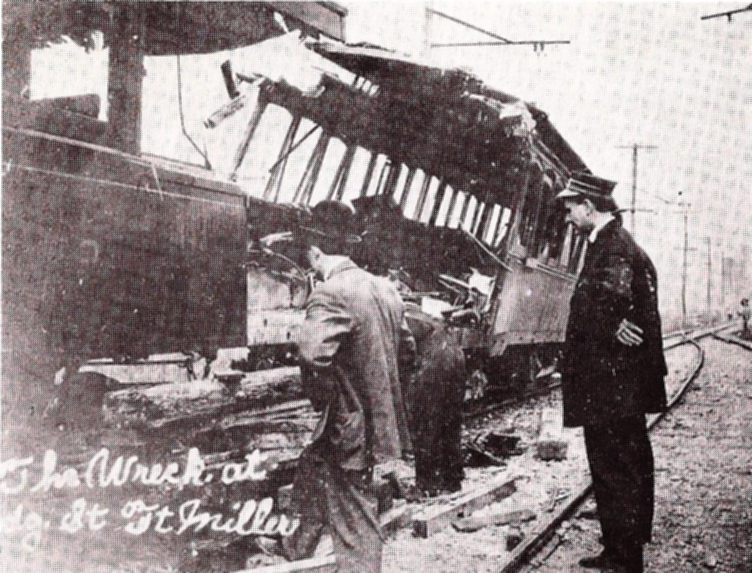 Here is a photo of the horrific crash near Fort Miller from the book "Saratoga Through Car, A History Of The Hudson Valley Railway" by David F. Nestle.

Here is a sad day for the Hudson Valley Railway.  It's the last day of the Fort Edward Branch in the Summer of 1928.  Number 71 is seen on Broadway in Fort Edward in front of St. Joseph's Catholic Church riding behind a horse car that was used in the Lumber District of The United Traction Company of Albany.  Another possession of The Delaware And Hudson Railroad.

Special thanks to The Aubrey Family for sharing their photos and memories....
Posted by Gino’s Railpage at 12:55 PM