Get Your Own FJ&G RR Cap!

Looking for a great father's day gift?  Heck, this would make a great Mother's Day, Groundhog's Day, President's Day, 4th Of July gift!!!!  It's the all new, 2013 designed Stonewashed Cap of The Fonda Johnstown and Gloversville Railroad.  The design is from a 1905 Time Table and it comes in Green, Red or Blue!  Hurry to Gino's Rail Blog Store and grab a couple for those special occasions! Last Days Of The Gloversville And Northville 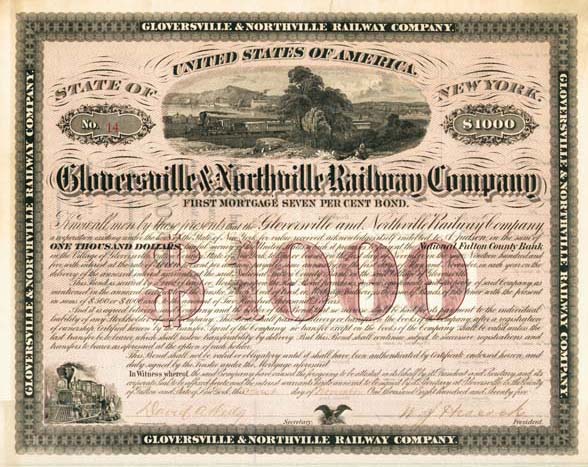 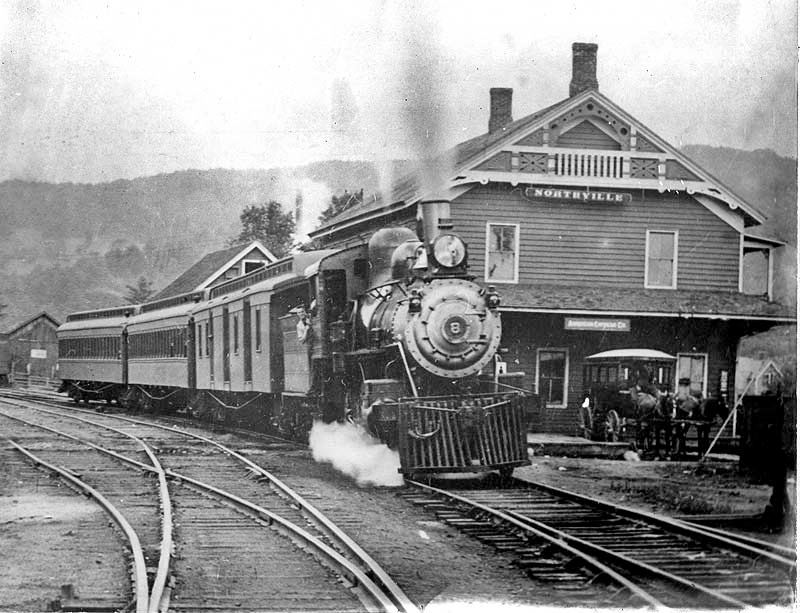 Although Sacandaga Park remained a popular tourist attraction in 1922, getting there by automobile started a new trend. To save money, the FJ&G purchased a number of gas-powered passenger cars from Brill to to speed up the trip to the Park. 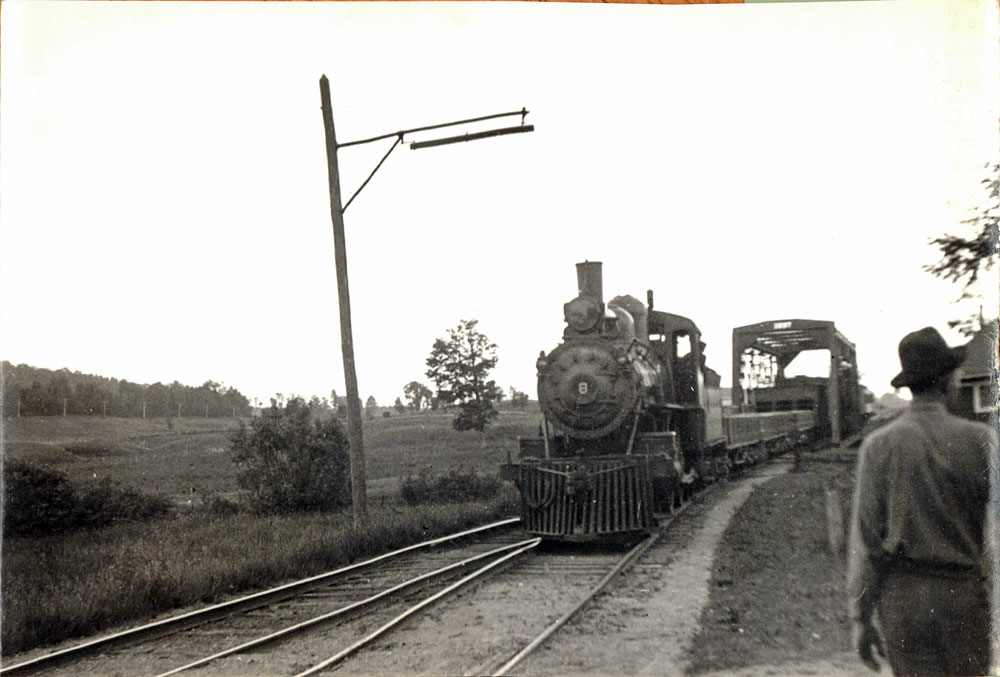 At Mayfield, a quarry helped keep the Northville Line humming.  Here is FJ&G 4-4-0 #8 arriving at the Mayfield Depot. On the time-table, this was Train Number 15, the Daily Mixed Train from Gloversville.  Note the coaches at the rear of the train.
In the 1920's business was slowing down on the branch and New York State was eye-balling The Sacandaga Valley as the site of a new reservoir, that would double as flood-control for cities along the Hudson and maybe generate Electricity. 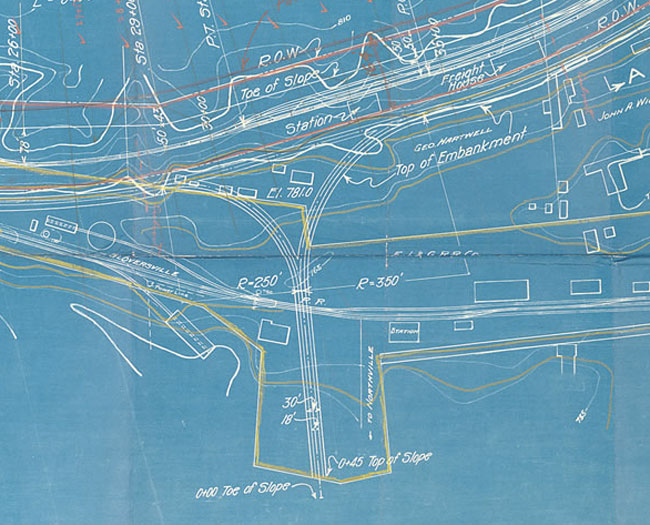 Even as early at 1911, the State of New York had her desires in creating a reservoir in the Sacandaga Valley.  Plans, including a relocation of the railroad were in the works almost twenty years before the idea came to fruition.  The State finally won out, but not before a fight from the FJ&G.  The fighting in court started in 1925 and the railroad wanted $4,000,000 for their abandoned road and for re-location.  After years of fighting, the FJ&G was awarded $1.7 million for their troubles which they felt didn't justify rebuilding a railroad around the new reservoir. 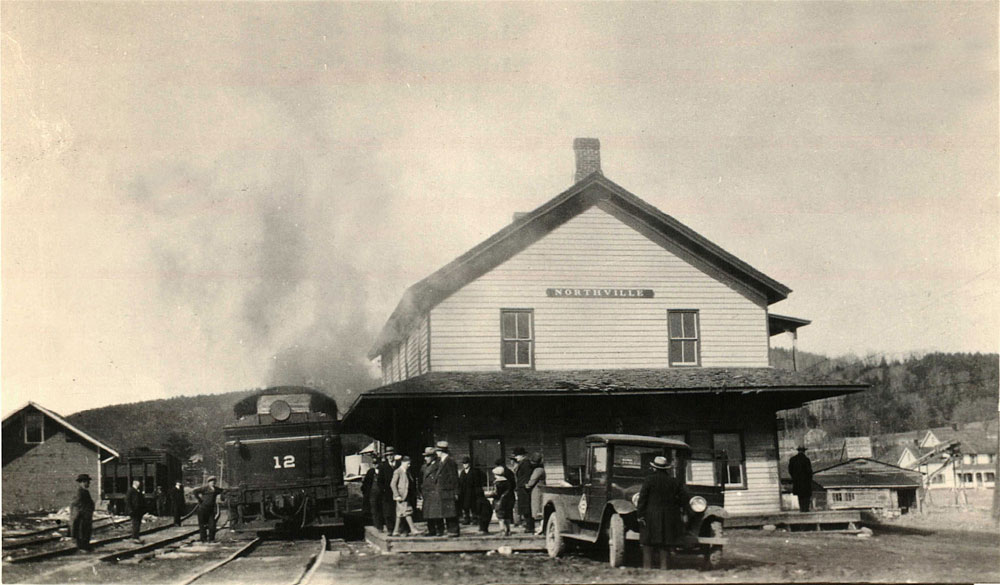 The date of March 27th, 1930 was set to close the doors on the new Dam at Conklingville.  With flooding fast approaching, the FJ&G officially abandoned their Northville branch on March 16th, 1930, with the last revenue train running on the 15th.  Here is a group of 'suits' from the FJ&G gathering railroad property from the depot for  the last steam trip on the line.  A gas-car would make one more run, later that night.  On March 17, removal of track started at Northville.  The removal of the depot would begin in early April. 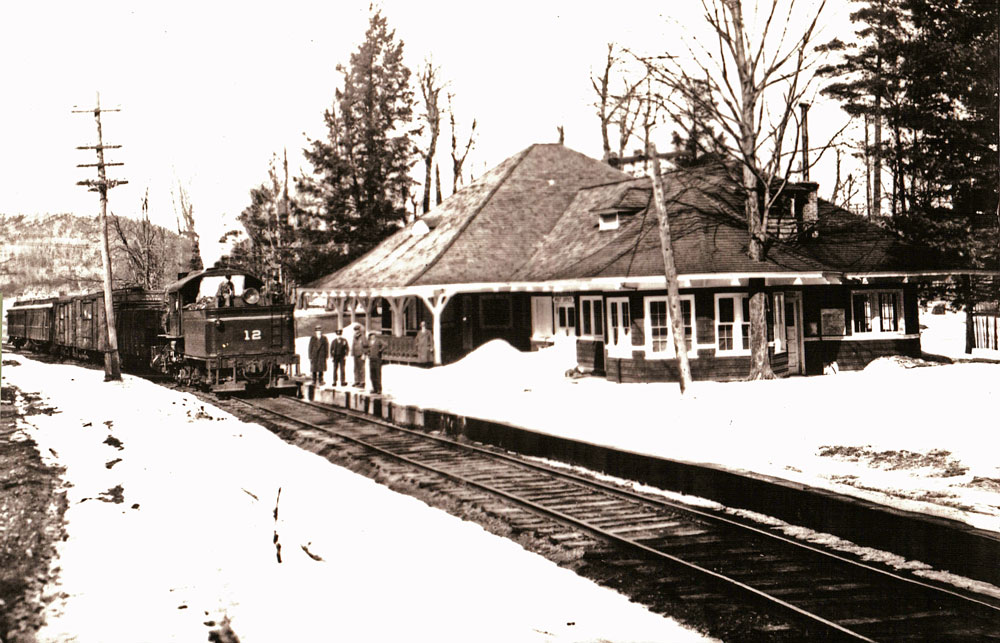 Next stop on the run would be the 10 year-old Sacandaga Park Station.  This would be one of the last trains to leave Sacandaga Park, but the station would continue to be a depot for the FJ&G's new truck and bus business.  It also doubled as a post office for years later.  Although most of Sacandaga Park was lost to the new reservoir, the station was high above the flood zone.  Workers would be removing track at Sacandaga Park on the 18th of March. 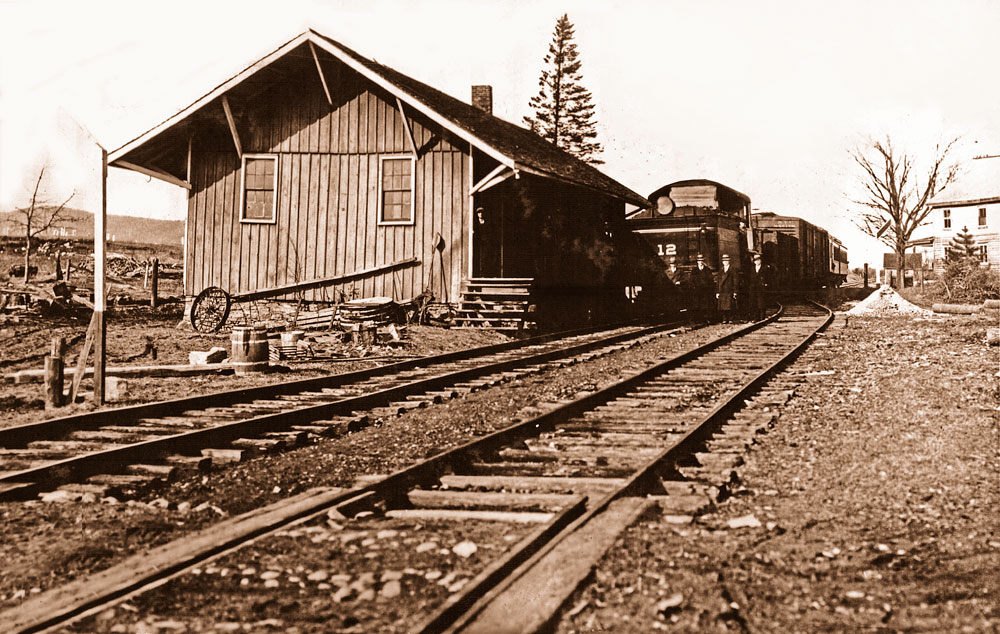 The tiny Hamlet of Cranberry Creek would become about 90 percent covered by the new reservoir.  This location was about an 1/8th of a mile West of the current offices of the Hudson/Black River Regulatory Commission.  This small depot was the lifeline to the residents, including the Gifford Family with the outside world. 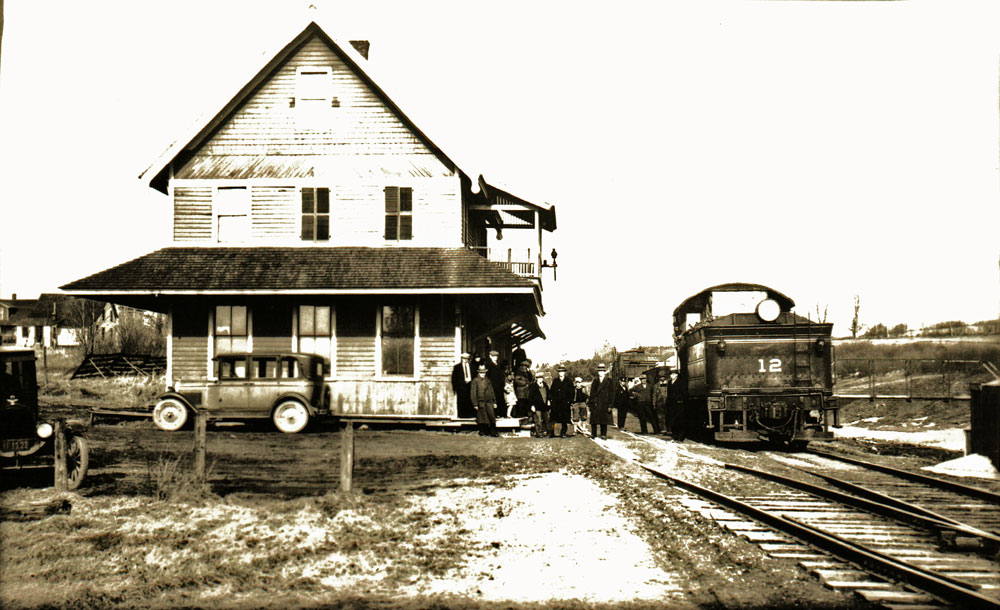 The last stop on the Northville Branch to be lost to flooding was the Mayfield Station.  One difference is this station was to be covered by Mayfield Lake, which was created at the same time as the Sacandaga Reservoir. 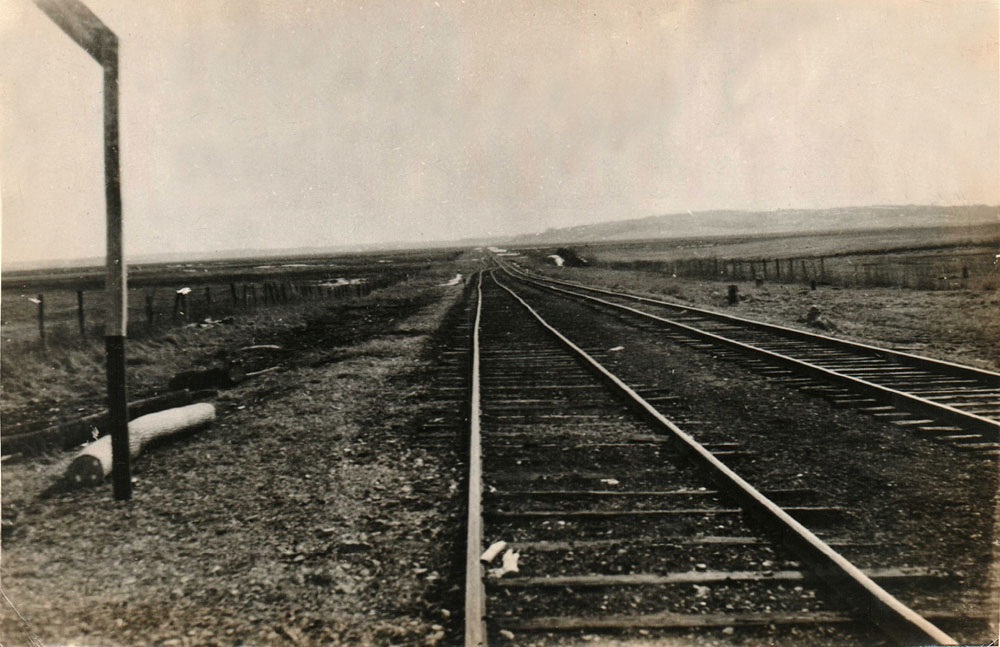 Looking South from Cranberry Creek shows where the 8 miles of the Northville Branch would be covered by the new reservoir. 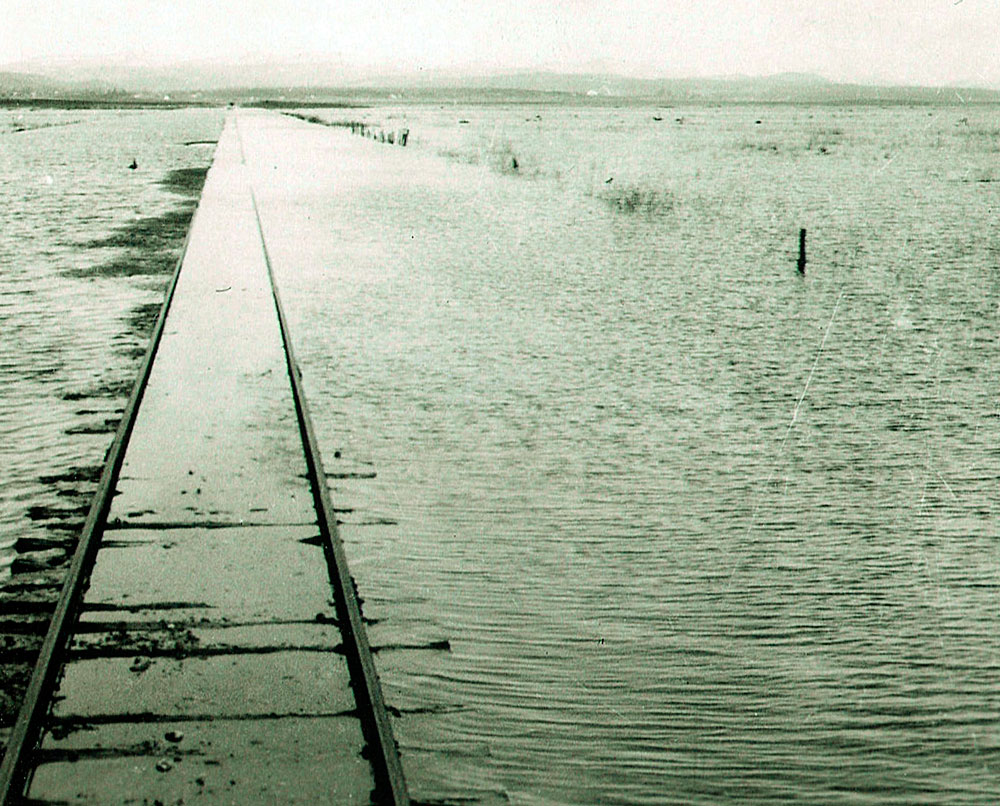 Heavy rains sped up the flooding of the Valley.  Contrary to popular belief, demolition crews were successful in removing all structures from the valley.  Residence were paid for their land, Fires and smoke filled the valley starting in 1928. The flooding was to begin earlier than 1930, but the litigation instigated by the FJ&G caused a later start. 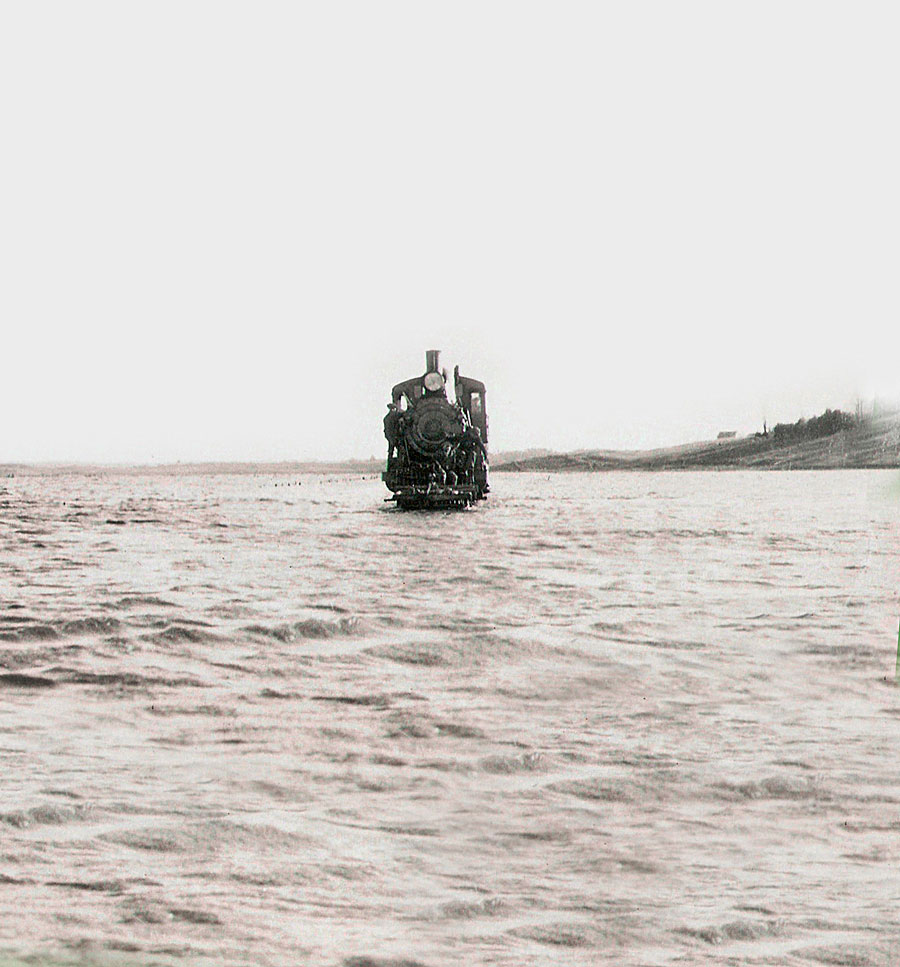 A photo that captures many people's imagination is this one of Number 8 working with the Scrap Crew on April 8th, 1930.  With 2 feet of water inching closer to her firebox, Engine 8 had to return to Gloversville.  Not taking chances, one of the FJ&G's 200-series Brill Gas cars (Like #200 Above) was used to pull the flat cars stacked with scrapped rail.

With the water rising to new levels daily, scrap-crews worked extra hard to remove the flooded rail.  The crews had to stop when the water level got too high and were forced to leave 1 mile of rail under the new reservoir.  A petition to the State Legislature in 1931 plus an early drought provided workers with a chance to remove the remaining 1 mile of trackage.  Contrary to popular belief, there are no buildings remaining under the reservoir and NO abandoned railroad...

Special Thanks to the Fulton County Museum for the use of photos and to Paul K. Larner for help with information contained in this story.

Posted by Gino’s Railpage at 8:32 PM No comments: